Ninety thousand years after a catastrophic pyroclastic flow,
the colorful lands and waters of Bungo nurture all lives

Bungo Ono stands on grounds which were completely buried under the pyroclastic flow from a huge eruption of the Aso volcano around 90,000 years ago.
As time passed, water began to flow into the area, bringing life and abundance back to the land.
Land and water are the sources of all life, supporting and connecting all forms of “inochiki”*
We see these various types and ways of life as colorful.

*“Inochiki” is the word for “livelihood” used in Oita dialect.

Bungo Ono City is located in southern Oita Prefecture, eastern Kyushu. It spans an area of 603 square kilometers, and is the third largest city in size in the prefecture. The city was formed in 2005 through a merger of seven towns and villages from the former Ono County: Mie, Ono, Inukai, Asaji, Ogata, Chitose, and Kiyokawa. The area has abundant natural scenery, with one of Kyushu’s most outstanding waterways, the Ono River, running through the center of the city, and the Kuju Mountains, Mt. Aso, and the Sobo-Katamuki Mountain Range surrounding it. The entirety of Bungo Ono City was registered as a Japanese Geopark in September 2013. 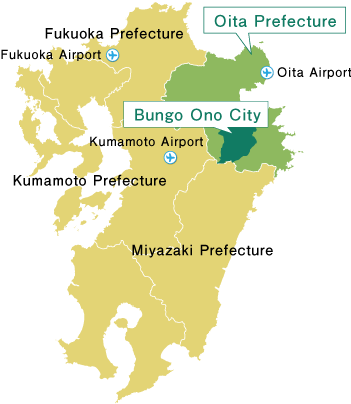 Lands Brought Back to Life

Huge Eruption at the Aso Volcano 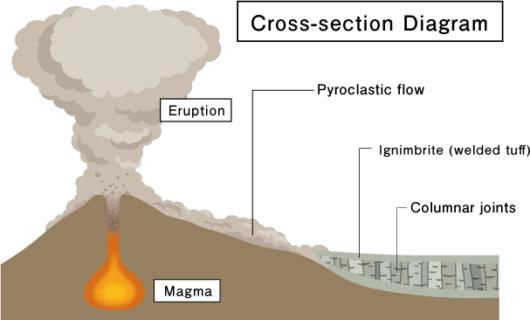 Around 90,000 years ago, a huge eruption occurred at the Aso volcano. It was an event of unimaginable scale, and the largest in its history. This eruption caused huge pyroclastic flows (fast-moving currents of hot volcanic gas, ash, and rocks) to smother nearly the entirety of the area that makes up today’s Bungo Ono City.

The pyroclastic flows spread to cover most of Kyushu, partially even crossing over the sea to reach today’s Yamaguchi Prefecture on the main island of Japan. The pyroclasts accumulated several tens of meters high in the plains of central Bungo Ono, with some of it melting from its own heat before cooling and hardening to form into a type of rock known as ignimbrite (welded tuff).

Shrinking as it cooled, it formed countless vertical cracks. This formed what we call columnar joints. These joints of ignimbrite can be seen throughout the Oita Bungoono Geopark.

Once water began to flow again on the lands buried by the pyroclasts, it formed rivers that then started to wear away the land. The vertical splits of the columnar joints made of ignimbrite eventually turned into waterfalls along the river. This also formed steep cliffs on both sides of the valley. The ignimbrite that had not formed columnar joints was relatively soft and easy to work with, and ended up Buddha statues carved in stone cliff.
Many arched stone bridges made of ignimbrite were also constructed for safe passage over the deep valleys. Meanwhile, areas not worn down by the river formed plains atop the plateaus, which would go on to be used as farmland.
Irrigation canals were also built upstream of the waterfall to bring water to the paddies along the deep valleys. In a variety of ways, the pyroclasts from the Aso volcano have brought the area both hardships and blessings. And the wisdom of all those who worked to overcome such hardships is what has fostered the culture of Bungo Ono today.

Mountains and valleys are formed over long periods of time via erosion.

The valleys are filled by pyroclasts, forming columnar joints in the most densely filled areas.

Erosion once again forms valleys, with columnar joints helping to form waterfalls, carvings of Buddhas are made in the cliff faces, and stone bridges are built over the deep valleys. The plains atop the plateaus, having survived erosion, come to be used as farmland.